Fueled by the turmoil of adapting to a new life in Los Angeles, CA after moving from Curitiba, Brazil, Gabriel Connor formed Red Devil Vortex as the lead singer and bassist in 2016.  Red Devil Vortex aspires to create genuine powerful music with the message to keep prevailing in spite of chaos and adversity

The band found success with the release of their first EP in 2018, Something Has to Die, produced by Augustus Cryns. Their EP sold over 1,200 copies during its first week alone, quickly hitting #16 on the Billboard charts (Heatseekers chart). Spurred by this initial success, Red Devil Vortex went back into the recording studio to work on their second EP, Dark Secrets, in 2019.

During this time, the band released two new singles, “Viper” and “Ready,” months apart in anticipation of their upcoming EP release. The track recordings were finally completed in 2020 during the Covid-19 pandemic however this EP was put on hold with the departure of the band’s guitarist and drummer as well as the loss of their friend and producer, Augustus Cryns.

Regardless of the setbacks, Gabriel Connor was determined to keep Red Devil Vortex alive. In search of new members to restore the band, Gabriel found Luis Kalil, an award-winning guitarist with an impressive list of performances under his belt. With the addition of Luis, recorded guitar portions were re-recorded paying homage to Augustus Cryns while paving a new era for Red Devil Vortex. Their second EP, Dark Secrets, was released in February of this year.

In addition to lead singer and bassist Gabriel Connor and guitarist Luis Kalil comes Eduardo Baldo, an incredibly talented drummer with his own tracklist of impressive performances.  With this powerful trio, we can’t wait to see what Red Devil Vortex brings us next. 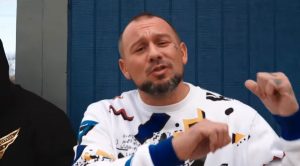