Struggle, confidence, motivation and performance are said to be the building blocks of an artist. Dave LeDoux is the name of those words. A struggling soul ever since his childhood, it is not exaggeration calling him a genuine musician. The way he dedicated his early ages in learning musical instruments. Shifting of focus from beats of drum to chords of guitar is perhaps his first independent decision. Later on that courage helped him in doing astonishing wonders in music.

Iron Maiden, Ozzy, AC/DC, Guns ‘N’ Roses and Alice in Chains are few names who polished the skills of Dave LeDoux where he remained part of these bands.

The great friend and mentor he found was Eddie Van Halen. He was the man who made him-the perfect guitarist.

“He is more than a friend to me” says Dave.

The year 2020 was shrouding with worries and pandemics. Dave LeDoux is individual who introduced “Broken” in the music market. His work has come as gift to mankind. Although “Broken” is available on Spotify and it has yet to touch the whole music industry. Dave LeDoux is the name of melodies. The introduction of “Broken” is actually the blend of three decade rock music Dave LeDoux tells his listeners. 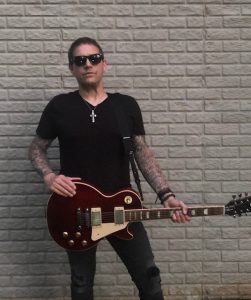 There is no short cut to success. Dave has toured on the wings of experience; “Broken” is outcome of his great sense of music. The tunes and beats are synchronizations of hearts and minds in his work. With the span of time the name of Dave LeDoux is bringing contemporary taste of music for his fans with evolved flavour of melodies.

Musician Erene Mastrangeli believes that her single “Love, Shine” came to her with a specific mission: to nurture love in people’s hearts and defeat hatred, racism, discrimination and inequality through music

Musician Erene Mastrangeli believes that her single “Love, Shine” came to her with a specific mission: to nurture love in people’s hearts and defeat hatred, racism, discrimination and inequality through music